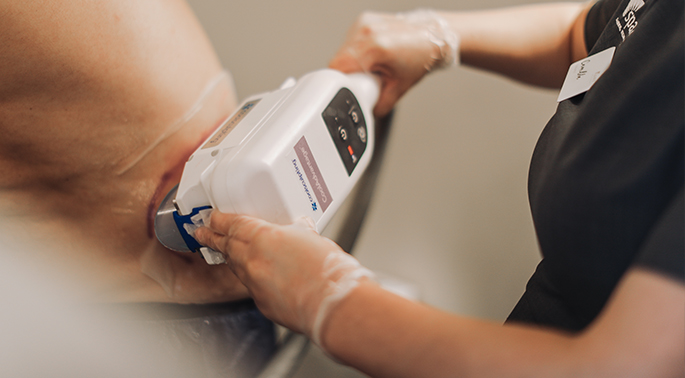 CoolSculpting has been proven in many studies to be an effective fat reduction procedure and with over 7 million cycles already carried out across the globe it is the world-leader in fat freezing. CoolSculpting works by applying the device to an area of the body and then over 35-45 minutes it effectively freezes the lower layers of fat and leaves the surface layer of skin unaffected. CoolSculpting received approval from the U.S. Food and Drug Administration (FDA) in 2010 as an effective fat-freezing treatment.

CoolSculpting is a non-surgical and non-invasive procedure (ie no operation or even needles are required for the procedure) to remove fat cells from beneath the skin so that stubborn areas of fat that you may dislike can be ‘contoured’. This means that the recovery time for the majority of people is negligible. Following the procedure you may find it uncomfortable to play sports or work-out for a couple of days but you can usually get on with normal day and you won’t have the associated risks of a general anesthetic (as you would with liposuction).

The thing to remember about CoolSculpting is that it is not a substitute for good diet and exercise and it is not a weight-loss procedure. It works best on people who are close to their ideal weight.

CoolSculpting works really well and has great results for treating people’s body fat who maintain a healthy lifestyle but have stubborn areas of fat that they can’t shift.

What Areas Does CoolSculpting Work For?


The CoolSculpting procedures approved by the FDA include the upper arm, banana roll (underneath the bum), submental area (neck/double chin), thigh, abdomen, flank (love handles), and back /bra fat. So, if you want to lose weight over your whole body then CoolSculpting isn’t right for you yet. However, if you have always been bothered by a double chin (which can often be genetic) or a post-baby bulge, or it might be love handles that just won’t budge despite endless gym classes, then CoolSculpting may well be for you.

Will CoolSculpting Work For Me?


In order to find out if CoolSculpting will work for you, you would need to have a Consultation with a CoolSculpting-trained aesthetician. During this Consultation you will be marked up with a pen to see what areas can be treated and you will be told what you could expect with the treatment. You will be told how much fat-reduction you could expect and how many cycles you would require. It is this bespoke consultation that is so important as everyone is different. Some people may require only 1 session (known as a ‘Cycle’) whereas others may require two or more on the same area to get the results they are looking for.

Also during your consultation you will be told how many Cycles you will require for the targeted area. For instance, on the Abdomen you may need only two areas (e.g either side of your tummy button), but you could require six areas – to treat the whole abdomen area

Why Does CoolSculpting Work When Others Fat-Freezing Treatments I’ve Read about Don’t?


CoolSculpting does as it says, it ‘Sculpts’ the body so the applicators are fitted very carefully to your body to get a satisfactory result – be warned of other companies that offer fat- freezing as they can produce more unnatural results and create ‘dents’ in the body. In addition, some other applicators do not take the fat cells to 4 degrees Celsius so the fat cells do not die. Effective fat freezing involves cooling targeted fat cells to 4 degrees Celsius and at that temperature the fat cells die. Over the coming weeks, the fat cells are naturally processed by your body. This is the Cryolipolysis technology that CoolSculpting has been FDA-cleared for.

How Long Does CoolSculpting Take To Work?


Within a 12 week period, you will start seeing the results as the treated fat cells are crystallized (frozen), then die. Once the fat cells have died, they are naturally processed and eliminated, so they won’t migrate to another area of your body.


“Hayleyanne made me feel totally at ease and she was absolutely amazing and friendly whilst being extremely professional. I can’t begin to praise her enough. The treatment was all that she explained in detail and even after just one treatment I can already see and feel the difference! Thank you Hayleyanne!”

“I’m really pleased with my results from just one CoolSculpting session – and despite putting on weight over the summer, it hasn’t gone back on my tummy”

Read other reviews on CoolSculpting:

To find out if CoolSculpting is suitable for you and what results you could expect, just book in for a complementary Consultation at spa810 – call 01423 590810.
CoolSculpting Treatment Page
How to protect your skin from the Sun
Previous Article
How long does laser hair removal last?
Next Article